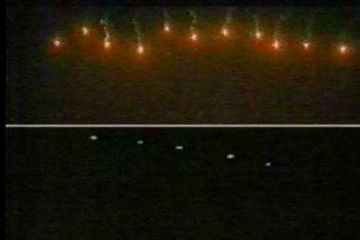 The lights were reported to have reappeared in 2007 and 2008, but these events were quickly attributed to (respectively) military flares dropped by fighter aircraft at Luke Air Force Base and flares attached to helium balloons released by a civilian

As a pilot and a former Air Force Officer, I can definitively say that this craft did not resemble any man made object I’d ever seen. And it was certainly not high-altitude flares because flares don’t fly in formation

I’ll never be the same. Before this, if anybody had told me they saw a UFO, I would’ve said, ‘Yeah, and I believe in the tooth fairy’. Now I’ve got a whole new view. I may be just a dumb truck driver, but I’ve seen something that don’t belong here

Parachuted flares do not hover motionless in the sky. They fall, slowly, but the fall is perceptible as recent military flares over Phoenix demonstrated. If you’ve seen the video of the Phoenix lights, they are not descending at all. They are hovering

This entry was posted in Music. Bookmark the permalink.